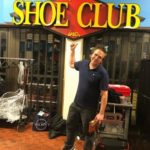 Tom Scharpling has been straddling the line between writing, directing and broadcasting for the entirety of his confusing career. As a writer, he wrote for the Emmy®-winning series "Monk" throughout its eight-season run. He also wrote for "Difficult People" starring Julie Klausner and Billy Eichner as well as "Nathan For You," "Eagleheart," "Tom Goes to the Mayor" and the first season of the HBO dramedy "Divorce." He is currently the co-executive producer on the television adaptation of the hit movie "What We Do In the Shadows," which premieres this spring on FX. He is best known as the host of the weekly radio show "The Best Show with Tom Scharpling," a program that has been ongoing for over 17 years. He has been creating comedy for the last two decades as one half of the comedy duo Scharpling & Wurster, named “punk geniuses” by SPIN. Scharpling is also known as the voice of “Greg Universe” on Cartoon Network’s "Steven Universe," “Jermaine” on "Adventure Time" and “Willie Nelson” on "Aqua Teen Hunger Force." He also lent his voice on "The Simpsons" in 2017. He also directs music videos and commercials. His music video for Aimee Mann’s “Labrador” was ranked the number two video of the year by TIME Magazine, behind “Gangham Style”. Scharpling currently lives in New Jersey.