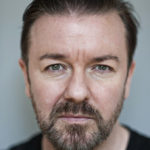 Creator and star of ‘The Office’ and ‘Extras’, Ricky Gervais has won three Golden Globes®, two Primetime Emmys® and seven BAFTAS. ‘The Office’ is the most successful British comedy of all time, shown in more than 90 countries with seven remakes. The NBC version is the most successful US remake of a British show in more than 30 years. Considered the most influential British comedian since Charlie Chaplin, Gervais is an award-winning stand-up comedian, with four international tours to date. His live stand up show ‘Fame’ became the fastest selling UK stand-up show in history. Gervais is also featured in The Guinness Book of World Records for having the most downloaded internet show of all time. He has written, directed, produced and starred in ‘Cemetery Junction’, ‘The Invention of Lying’, and starred in ‘Ghost Town.’ In 2010, Gervais was asked to be the first host of the Golden Globes® since 1995, for a broadcast seen by an estimated 250 million. He was named in TIME Magazine’s 100 Most Influential People in the World and awarded the Sir Peter Ustinov Comedy Award from the Banff World Television Festival. Gervais has since hosted the Golden Globes® in 2010, 2011, 2012, and was invited back for a fourth time in January 2016. In 2012, HBO aired ‘Life’s Too Short’ and the third season of ‘The Ricky Gervais Show’, and Ricky wrote, directed and starred in ‘Derek’ for Channel 4 and Netflix. 2013 was just as busy, with an international release of 'An Idiot Abroad 3: The Short Way Round', taking the lead role in ‘Muppets Most Wanted’ and production on series 2 of the award-winning ‘Derek’, both of which were released in 2014. On April 3, 2015 Gervais reprised his Golden Globe nominated role as Derek, in a one-hour finale special on Netflix. Most recently, Gervais starred in ‘Special Correspondents’ an original comedy film, which debuted worldwide on Netflix in 2016. The film is written and directed by Gervais, and also starred Eric Bana, America Ferrera and Vera Farmiga. Later that year, Gervais returned to his most famous creation, writing and directing David Brent: Life on the Road. Gervais returned to stand-up in 2017 with his sell-out stand-up show, Humanity, which he’s touring worldwide into 2018. Netflix have acquired the rights to Humanity and it will stream on this service in early 2018. ‘Ricky Gervais is Deadly Sirius’ launched in October 2017 on Sirius XM which sees Ricky's return to radio. Guests on the first season of his show include Noel Gallagher, Richard Dawkins and Professor Brian Cox.