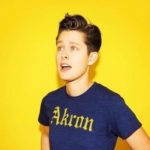 Rhea Butcher is a Los Angeles-based stand-up comic, actor and writer. Originally from the Midwest, Rhea grew up skateboarding the mean streets of Akron, Ohio. Her blue collar brand of cool has endeared her to audiences nationwide, as she appears on shows such as @Midnight, Conan, and Adam Ruins Everything. Her GLAAD Award Nominated, New York Times/Vanity Fair/Esquire/Vulture Critics' Pick show, “Take My Wife,” which she co-created and co-stars in with her wife, Cameron Esposito, premiered on NBC’s Seeso in 2016. Currently in post on the second season, in which Rhea added the role of director to her resume, they will be hitting the road together for a theatre tour this fall to be announced soon. Rhea's debut standup album, “Butcher” was released earlier this year at #1 through Kill Rock Stars Records and you can experience her weekly; co-hosting the long-running live show and podcast, Put Your Hands Together.