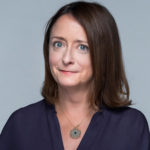 Rachel Dratch was a cast member on "Saturday Night Live" for 7 years. Before that she was on the Mainstage of Second City Chicago for four years, where she wrote and performed with Adam McKay, Scott Adsit, and Tina Fey. She appeared in a bunch of TV shows, including "King of Queens" where she had a recurring role as Patton Oswalt’s girlfriend. She’s been in a bunch of movies, most of which are with Adam Sandler. Rachel is really into name-dropping. Her book, "Girl Walks into a Bar" was published by Gotham. Thank you, and have a wonderful day.