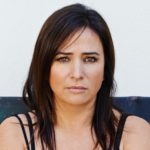 Raised in both New York and Los Angeles, Pamela Adlon has been acting since she was 12 years old. She made her film debut in "Grease 2" and has appeared on the big screen in "Say Anything," "Bed of Roses," "The Adventures of Ford Fairlane," "Sgt. Bilko," "Plump Fiction" and "Some Girl." Her television and animation credits are long and storied. Recent highlights include co-starring roles in USA’s "Playing House," NBC’s "Parenthood," and the upcoming Kerem Sanga directed film, "First Girl I Loved." Adlon is probably best known for her role as the unpredictable Marcy on Showtime’s "Californication" and has also won an Emmy® for Outstanding Voice-Over Performance for her portrayal of Bobby Hill on Mike Judge’s animated series "King of the Hill." She also voices the role of Vidia in Disney’s "Tinker Bell" movies. Adlon starred on HBO’s "Lucky Louie," and also appeared on, wrote, and produced the FX series "Louie," for which she’s been nominated for 4 Emmys. Adlon created and stars in the FX comedy "Better Things," for which she received an Emmy nomination.