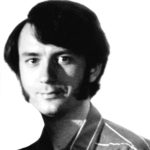 Singer - songwriter – pioneer: all words best describing Michael Nesmith. Starting in the Texas folk scene in 1963, he quickly blossomed into a brilliant tunesmith during his time on the Emmy award-winning "The Monkees." His melodic, country-tinged songs were regularly featured on the band’s multi-million selling albums and singles, but he heard a greater creative calling to find his own voice as a record maker. After two seasons with "The Monkees," eight albums and a feature film called "Head," Nes formed a solo unite, the First National Band. He went onto to record a catalog of acclaimed music that continues to this day. Meanwhile, he also continued to mine his visionary comedy with the long-form video, "Elephant Parts" and spin-off television series, "Television Parts." One can also trace the thread of his humor through his film productions, "Repo Man" and "Tape Heads." His creation of MTV via his pilot, "Popclips," is another worthy touchstone. In January 2018, Michael Nesmith sold out The Troubadour in West Hollywood, performing his First National Band music for the first time in four decades. His recent autobiography, "Infinite Tuesday," traces his fertile imagination and explores his decades of innovation.