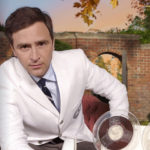 Dr. Matt Gourley, PyT has performed with Upright Citizen’s Brigade, Second City, and Improv Olympic. He has been featured on Comedy Central's "Drunk History," slurring his way through thoughtful retellings of Watergate and the Alamo. Other mentionables include "Adventure Time," "Attack of the Show," "Ghost Ghirls," and NBC's "World Cup Comedy." Matt is also the spokesperson for Volkswagen and can been seen in other various commercials for other various corporate titans. He edits the Superego Podcast and is the podcast developer for Earwolf and Wolfpop. There, he hosts the "I Was There Too" podcast as well as co-hosts the "Andy Daly Podcast Pilot Project." More podcasts? You bet. Matt also co-hosts the "James Bonding" podcast for Nerdist.com. And finally, Matt is an adjunct professor who teaches acting and improv at various southern California colleges, where he will most likely give you an easy A.