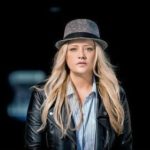 Lucy’s first job as an actress was at the age of 20, when she played Maria Lucas in the BBC/A&E adaptation of “Pride and Prejudice,” with Colin Firth and Jennifer Ehle. A few years later, she starred in the Golden Globe winning BBC comedy “The Office,” playing Dawn Tinsley. Shortly after this she played Dianne in Simon Pegg and Edgar Wright’s zombie movie “Shaun of the Dead.” She is also part of Pamela Adlon and Louis CK’s comedy drama “Better Things” on FX. And more recently, she can be seen in the new DC movie “Wonder Woman,” where she plays Wonder Woman’s friend and Steve Trevor’s secretary – Etta Candy, and as Aunt Hilda in “Chilling Adventures of Sabrina” on Netflix.