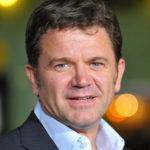 Michael Higgins is a double hyphenate: he’s sort-of well-known for being a member of the Christopher Guest “company,” starring in such films as "Best in Show" and "A Mighty Wind." But before becoming a disreputable light improvisational comedic actor he spent twenty years on the New York and regional stages doing lots of things that nobody gives a shit about anymore. Then, after playing David Letterman in the HBO film"The Late Shift," Mr. Higgins’ career became centered in Hollywood. In addition to many animated series (like Janet Varney’s own “Legend of Korra” above or below, or whichever position she’s taking these days), Michael has another twenty years of appearances on television shows ranging from "Seinfeld" to "CSI," from "Ally McBeal" and "Arrested Development" to "Kath and Kim" and the recently deceased "Happily Divorced." Movie audiences also know him for his work in the films of Vince Vaughn, "The Break-Up," "Fred Claus" and "Couples Retreat" and with Jim Carrey in "Fun With Dick and Jane" and "Yes Man." More recently it’s been "Pitch Perfect" and "Best Man Holiday," in addition to lots of commercial work like Old Navy and that idiot executive in all those DIRECTV commercials and the current DIY videos for Lowe's on Funny Or Die.