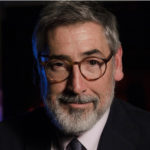 John Landis began his career in the mailroom of 20th Century Fox Studios. A high school dropout, in 1969 18-year-old Landis made his way to Yugoslavia to work as a “gofer” on MGM’s Kelly’s Heroes. Remaining in Europe, Landis found work a an actor, dialogue coach, extra and stunt man in many of the “spaghetti” westerns being made in Spain at that time. At 21 years old he made his debut as a writer-director of the very low budget feature Schlock, an affectionate tribute to monster movies. Clad in an ape suit and make-up designed by the 20-year-old Rick Baker, Landis starred as the “Schlockthropus” or ‘missing link.’ Kentucky Fried Movie, directed by Landis and written by Jerry and David Zucker and Jim Abrahams, was a successful prelude to his next wildly successful comedy, the beloved National Lampoon’s Animal House. With a record of enduring comedy classics such as The Blues Brothers, Trading Places, Spies Like Us, Three Amigos! and Coming to America, Landis has directed some of the most popular blockbusters of all time. Landis wrote and directed the 1981 horror classic An American Werewolf in London, which so inspired Michael Jackson that he called upon Landis to write, produce and direct the groundbreaking theatrical short Michael Jackson’s Thriller in 1983. In 2009, Thriller was inducted into the Library of Congress National Film Registry, the second film directed by Landis to be honored. The Library of Congress inducted National Lampoon’s Animal House into the National Film Registry in 2001. Landis directed Michael Jackson again in the video for his song Black And White in 1991, which premiered simultaneously in 27 countries for an audience of over 500 million viewers. Landis was the Executive Producer (and often director) of the television series Dream On, which won HBO its very first Emmy. Other TV series executive produced by Landis include, Weird Science, Sliders and Honey, I Shrunk The Kids. He directed two notable documentaries, Slasher (2004) and the Emmy Award winning Mr. Warmth, The Don Rickles Project (2007). His acclaimed pop culture book, Monsters in the Movies was published by DK in 2011 and republished in paperback in 2016. John Landis was honored with the Chevalier dans l’ordre des Arts et des Lettres from the French Government in 1985, awarded the Federico Fellini Prize by Rimini Cinema Festival in Italy, and has been was named a George Eastman Scholar by The Eastman House in Rochester, New York. The Edinburgh Film Festival and the Torino Film Festival have held career retrospectives of his work and in 2004 Landis received the Time Machine Career Achievement Award at the Sitges Film Festival in Spain. Landis has received honors from the People’s Choice and NAACP Image Awards. He was honored by the India International Film Festival in Goa and was given the Career Achievement Award at the Fantasia Film Festival in Montreal. Landis has been a juror at many film festivals including Venice, Neuchatel, Gerardmer, and Antalya, Turkey. In 2009, the Cinematheque Francaise in Paris hosted a John Landis career retrospective. In 2016 Landis was awarded the Master of Fantasy Life Achievement Award from the Nocturna Film Festival in Madrid, and a Life Achievement Award from the Morbido Festival in Mexico City. He was honored with the “Legend of Comedy” Award from the Monte Carlo Film Festival in March, 2017. In London in June, 2017, Landis acted as writer, host and narrator of a Royal Philharmonic Orchestra tribute to his frequent collaborator, composer Elmer Bernstein. Conducted by his boyhood friend Peter Bernstein at the Royal Albert Hall, this commemorative evening was the third in a series of concerts in celebrating Bernstein’s long career. Landis is married to noted costume designer, and costume design historian, Deborah Nadoolman Landis. Professor Landis has an endowed chair at UCLA and is the founding Director of The David C. Copley Center For Costume Design. They have two children; Max Landis, a successful screenwriter and Rachel Landis Rosen, an early childhood educator.