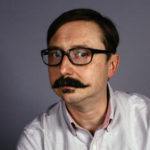 John Hodgman is a writer, comedian, and actor. He is the author of three books of fake facts and invented trivia, all of them New York Times Bestsellers, and his writing has also appeared in The Paris Review, This American Life, The New Yorker, and Mad Magazine. After an appearance to promote his books on “The Daily Show,” he was invited to return as a contributor, serving as the show’s “Resident Expert” and “Deranged Millionaire.” This let to an unexpected and, frankly, implausible career before the camera, becoming the “Personal Computer” in a series of commercials for Apple computer, and more recently playing recurring roles in FX’s "Married," HBO’s "Bored to Death," Cinemax’s "The Knick." He has performed comedy for The President of the United States, at the TED conference, and in a crypt in Green-Wood Cemetery. His apocalyptic comedy special "Ragnarok" is available on Netflix, and his subsequent one man comedy shows have played to sold out audiences in many nice theaters around the country and in Canada. Finally, he is the host of the popular "Judge John Hodgman" podcast, where he settles serious disputes between real people, such as “Is a hot dog a sandwich?” and “Should we tell our children the TRUTH about Santa Claus.” He also contributes a weekly column under the same name for The New York Times Magazine.