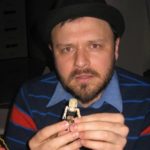 Jesse Hawthorne Ficks is the Film History Coordinator at the Academy of Art University in San Francisco and curates/hosts the MiDNiTES FOR MANiACS series at the Castro & Roxie Theater. He is also a member of the San Francisco Critics Circle and writes movie reviews for 48hills.