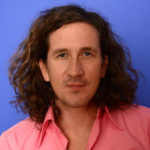 Ian Brennan is Co-Creator and Executive Producer of “Scream Queens” and “Glee,” which ran for six seasons on FOX and for which he is the recipient of two Golden Globe Awards. As an actor, he has performed at Playwrights' Horizons, the Vineyard Theatre and MCC Theatre in New York, as well as the Steppenwolf and Goodman Theatres in his hometown of Chicago. Ian performs weekly at the Upright Citizens Brigade Theatre in LA as part of Harold Night with his team, Zoo Zoo.