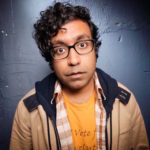 Hari Kondabolu is a Brooklyn-based comedian and writer who the NY Times has described as “one of the most exciting political comics in stand-up today.” His new album "Mainstream American Comic" is a follow-up to his critically acclaimed debut "Waiting for 2042," which was also released on legendary indie label Kill Rock Stars. Paste Magazine named the album one of the Top 10 Standup Albums of 2014 and The Portland Mercury wrote that “the marriage of careful joke structure and fiercely intelligent commentary elevates this album from a collection of solid progressive punchlines to a work of art.” It is currently on high school and college curriculums around the United States. Hari recently released his documentary film, "The Problem with Apu," about the stereotypical Indian character on "The Simpsons," onTruTV to rave reviews (The Hollywood Reporter, The New York Times, The New Yorker). Hari’s standup special, "Warn Your Relatives," is now streaming on Netflix and was filmed at the historic Neptune Theatre in Seattle. Hari has also appeared on "The Late Show with David Letterman," "Conan," "Jimmy Kimmel Live," "John Oliver's NY Standup Show," "Russell Howard's Good News," "@midnight," and has his own half-hour Comedy Central Presents special. On the podcast front, he has made appearances on "WTF with Marc Maron," "Death, Sex and Money," "You Made It Weird," "Too Beautiful to Live" & "2 Dope Queens." He currently has a podcast called "The Untitled Kondabolu Brothers Podcast" with his brother Ashok (Dapwell from Das Racist). Hari Kondabolu’s website is www.harikondabolu.com and he can be found on Twitter at @harikondabolu.