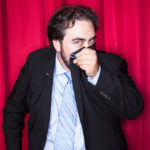 In addition to providing a multitude of characters for the Thrilling Adventure Hour, Hal Lublin has provided voices to a number of films, television shows, videogames and commercials. He is one of the featured players and writers on The David Feldman Radio program and podcast, and has performed improv and sketch comedy all over the country. He appears in a series of popular Symantec Videos as Hal, The IT Admin. You can follow him on twitter @hallublin.