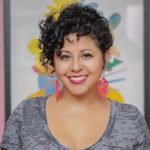 Favianna Rodriguez is an interdisciplinary artist, cultural strategist, and social justice activist based in Oakland, California. Her art and praxis address migration, economic inequality, gender justice, sexual freedom and ecology. Her practice boldly reshapes the myths, ideas, and cultural practices of the present, while confronting the wounds of the past. Favianna’s works serve as a record of her human experiences as a woman of color confronting interlocking cultural traditions and biases, while embracing joy, freedom and complexity as an antidote to the the life-long impacts of systemic inequality. Her signature mark-making embodies the perspective of a first-generation American Latinx artist with Afro-Latinx roots who grew up in working-class Oakland, California during the birth of internet, and in the midst of an era of anti-immigrant hate and the war on drugs. As part of her practice, Favianna leads art interventions around the United States. Her artistic modalities include social practice, visual art, arts advocacy and institution building . Favianna collaborates deeply with social movements to co-create visual narratives and cultural strategies that are resilient and transformative. In addition to her expansive studio practices, she is the Executive Director of CultureStrike, a national arts organization that empowers artists to dream big, disrupt the status quo, and envision a truly just world rooted in shared humanity. In 2016, Favianna received the Robert Rauschenberg Artist as Activist Fellowship for her work around immigrant detention and mass incarceration. In 2017, she was awarded an Atlantic Fellowship for Racial Equity for her work around racial justice and climate change. In 2018, she began organizing with artists in the entertainment industry through 5050by2020.com, an initiative launched by Jill Soloway to build intersectional artist power.