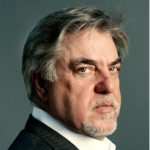 Since D-Day and his Harley roared up the Delta House stairs in Animal House, Bruce McGill has been a memorable screen presence. He has appeared in over 150 films, tv movies and series spanning the last five decades. Throughout his career — from Lincoln to Law Abiding Citizen, from Collateral to My Cousin Vinny, from Miami Vice to MacGyver to The Insider — he has consistently received rave reviews for his stand-out performances, and shows no signs of slowing down. Bruce has just ended his 7th and final season of portraying Detective Vince Korsak on TNT's hit series Rizzoli & Isles, and starting in Feb 2018, can be seen on NBC’s Shades of Blue. An avid golfer, Bruce’s favorite role to date was playing legendary golfer Walter Hagen in The Legend of Bagger Vance, directed by Robert Redford. And being a native Texan, Bruce was deeply honored to be inducted into the Texas Film Hall of Fame in 2010.