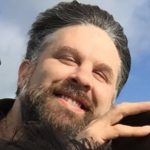 Ben Acker & Ben Blacker are the creators of the Thrilling Adventure Hour, a staged show in the style of old-time radio which is also a podcast on the Nerdist network and a graphic novel hardcover anthology from Archaia (which sold out its first print run), and will soon be a web-series (also from Nerdist) and a concert film. The live show boasts stars and guest stars from across the entertainment spectrum; everyone from Nathan Fillion and Clark Gregg to Ira Glass, Joe Mantegna, and Jon Hamm have guested on the show. Acker & Blacker have written for CW's Supernatural and Nickelodeon's Supah Ninjas, and they currently work for a Dreamworks/Netflix animated series. They've developed original pilots for Fox, USA (twice), Spike, Paramount, Nickelodeon, and other entities.