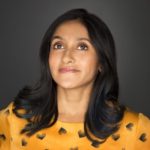 Aparna Nancherla first started doing comedy in her hometown of Washington D.C. and now resides in New York City. In 2016, she was featured in Elle’s Women in Comedy Issue as one of the most exciting new voices to hit the comedy scene.Nancherla can be seen in Netflix’s "Master of None" and "LOVE" as well as HBO’s "Crashing," "Inside Amy Schumer" on Comedy Central and Seeso’s stand-up series "Night Train with Wyatt Cenac." She’s performed stand-up on season 2 of "The Meltdown with Jonah and Kumail" and "Adam Devine’s House Party" on Comedy Central and her writing credits include "Late Night with Seth Meyers" and has served as a regular correspondent/writer on FX’s "Totally Biased with W. Kamau Bell." In 2013, she made her late night stand-up debut on "Conan" and was one of the breakout New Faces at Just For Laughs in Montreal. Her debut album "Just Putting It Out There" was released in July 2016 by Tig Notaro’s label Bentzen Ball Records and hit #4 on the Billboard Comedy Charts.